Fashion & Style, The Look For Less
by Mary
0
*this post may contain affiliate links 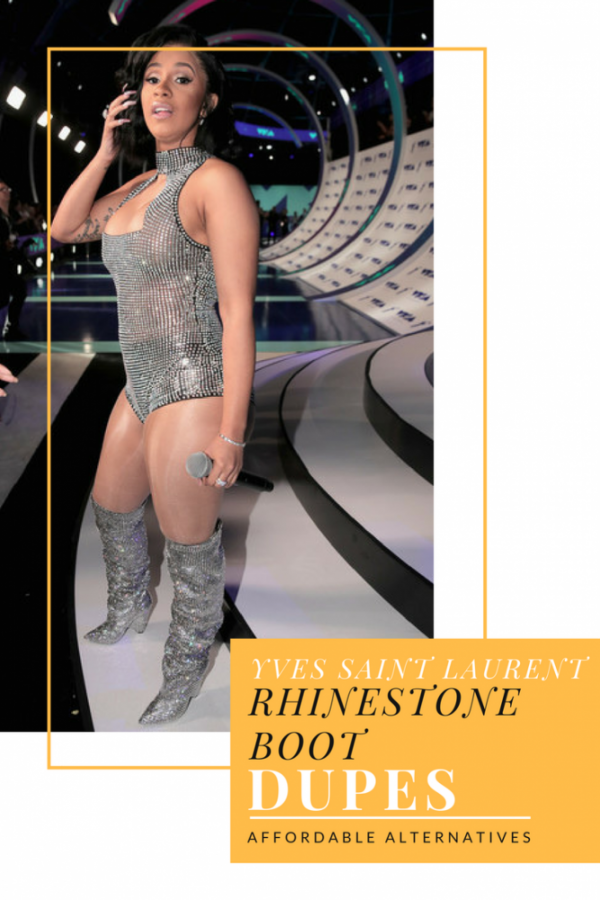 These crystal diamante boots – the YSL “Niki” boot – are approved by Rihanna and are the ones that Cardi B wore for her MTV award performance. We’ve also seen Celine Dion and Blac Chyna rocking them, and most recently, Kendall Jenner throughout her birthday weekend.

Here’s the tip of the iceberg though… They come with a $10k price tag and have a crazy long wait list.

Luckily, we have some options, which aren’t quite replicas, but similar copycats. If you’re really into designer dupes, check out my findings for Stuart Weitzman and Louboutin inspired shoes!

WOW I think I’ve found the best YSL inspired boots of the season! These are handmade and SUPER blinged out to the max. These are very very similar to the original boots. You’re getting the same look, but you get to knockoff THOUSANDS of dollars compared to the original.

These aren’t knee highs, but they have the high end rhinestone look to them. Great if you want the bling, but a want to keep it a little more low key. Also comes in a Gold, which I’m feeling!

These aren’t the same shape as the YSL’s, but have a similar shaft and have a nice rhinestone pattern. Comes in 4 colours!


JJF Sexy2 Over the knee boots in RoseGold

The rhinestones on these are set further apart and aren’t fully covered in rhinestones, but if you’re trying to keep the budget under $100, these are pretty darn cute. And the Rosegold? UMMM YES PLEASE! I’m about that life! (This listing also has the Pewter and Silver)

If you are trying to keep your budget under $100, these boots offer the same look and feel, but aren’t as blinged out as the Olivia And James boots. Still pretty good for $75!

These aren’t exact, but they’re still pretty cute. They have a bit of a western feel with curved top, sole and heel shape. The rhinestones give you that touch of extra glam

Also, check this listing which has both the silver and the black: 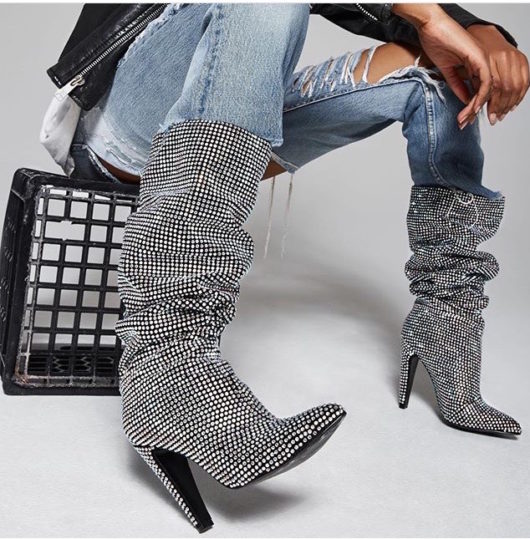 These (edited to add: these are actually the best copycats I’ve found!) They have the slouchy shaft and the almond toe, and features a stiletto heel as opposed to a block heel on the original Yves Saint Laurent ones.

These don’t have quite the same bling factor as the previous ones, but they do have a similar foot shape, with the exaggerated pointy toe and a block heel.

These offer the same slouchy look, but again, they have a stiletto heel. They aren’t quite the same, but they are still crazy blingy and will no doubt make you stand out.

These are a totally different fit, but they are still sparkly and shiny.

YSL’s boots, designed by Anthony Vaccarello, are carefully crafted. They are handmade and rumoured to have 3000 rhinestones per shoe. Though these dupes don’t have that kind of craftsmanship, they are sure to turn heads and receive compliments. Bling on!

Okay, these boots don’t have the shine factor or the closed toe, but the overall shape of the shoe is very similar. The geometric design is sure to get you noticed as well. There’s nothing basic about this boot!

How to look Instafamous

What's the deal with menstrual cups?

Learn how to get comped travel with Georg Papp

0
Mary
No Comments Yet

15 cheap substitutes to the Clarisonic Mia